On December 30th, 2021, Voyant Photonics, a producer of chip-scale, Frequency-Modulated Continuous Wave (FMCW) LiDAR sensors announced that it had secured $15.4M in Series A funding. The round was led by UP.Partners with LDV Capital and Contour Ventures joining in the investment. This latest round follows a July 2019 investment of $4.3 M. The company has raised a total of $19.7M to date. Nano-Optics Researchers
Voyant Photonics was founded in April 2018 by Chris Phare and Steven Miller, researchers specializing in nano-optics at the Lipson Nanophotonics Group at Columbia University. The company is developing a new class of ultra-small, LiDAR sensors for machine perception that offer performance comparable to larger, more expensive LiDAR solutions on the market today.

The target markets for the Voyant solution include the automotive, robotics, drone and automation sectors. According to Voyant representatives, developer kits are now available for select customers on the company’s waiting list.

Novel Solution
The Voyant silicon photonics technology – where data is transferred among computer chips by optical rays – differs in many respects from competitive LiDAR solutions. First is size. Like other solid state LiDARs, Voyant’s solution does not require moving parts, but by applying silicon photonics to LiDAR, the company has produced a “LiDAR on a chip” that is considerably smaller than other solid-state LiDAR solutions (to say nothing of mechanical LiDARs).

Voyant Photonics intends to leverage semiconductor fabrication processes to incorporate thousands of optical and electrical components onto a single chip. This will act to technically harden and further decrease the size of their LiDAR solution. Voyant Photonics intends to leverage semiconductor fabrication processes to incorporate thousands of optical and electrical components onto a single chip. This will act to technically harden and further decrease the size of their LiDAR solution. In addition, semiconductor manufacturing economies of scale will reduce Voyant’s production costs.

Most LiDAR solutions employ a time-of-flight (ToF) approach operating at 905nm wavelength utilizing pulsed laser diodes. In contrast, Voyant Photonics Frequency-Modulated Continuous Wave LiDAR operates at a 1550nm wavelength, which gives it a greater operational range, and reduces the risk of interference from extraneous sources such as other LiDAR systems, the light from passing vehicles, and other ambient lighting fluctuations. The Voyant FMCW system also requires less power, and delivers doppler velocity measurements in addition to distance.

LiDAR for the Rest of Us
Currently the target markets for Voyant Photonics’ 3D imaging solution includes the usual LiDAR adopter segments – the automotive sector, along with the robotics and drone markets. But Voyant representatives believe that the unique feature amalgamation of ‘small’, ‘inexpensive, ‘powerful’ and ‘accurate’ positions their LiDAR package as a cost-effective 3D sensing technology for other applications, including those in vertical market segments characterized by high volumes and equally high levels of cost-sensitivity. 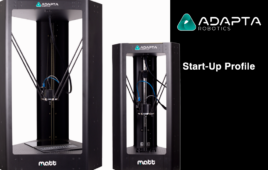